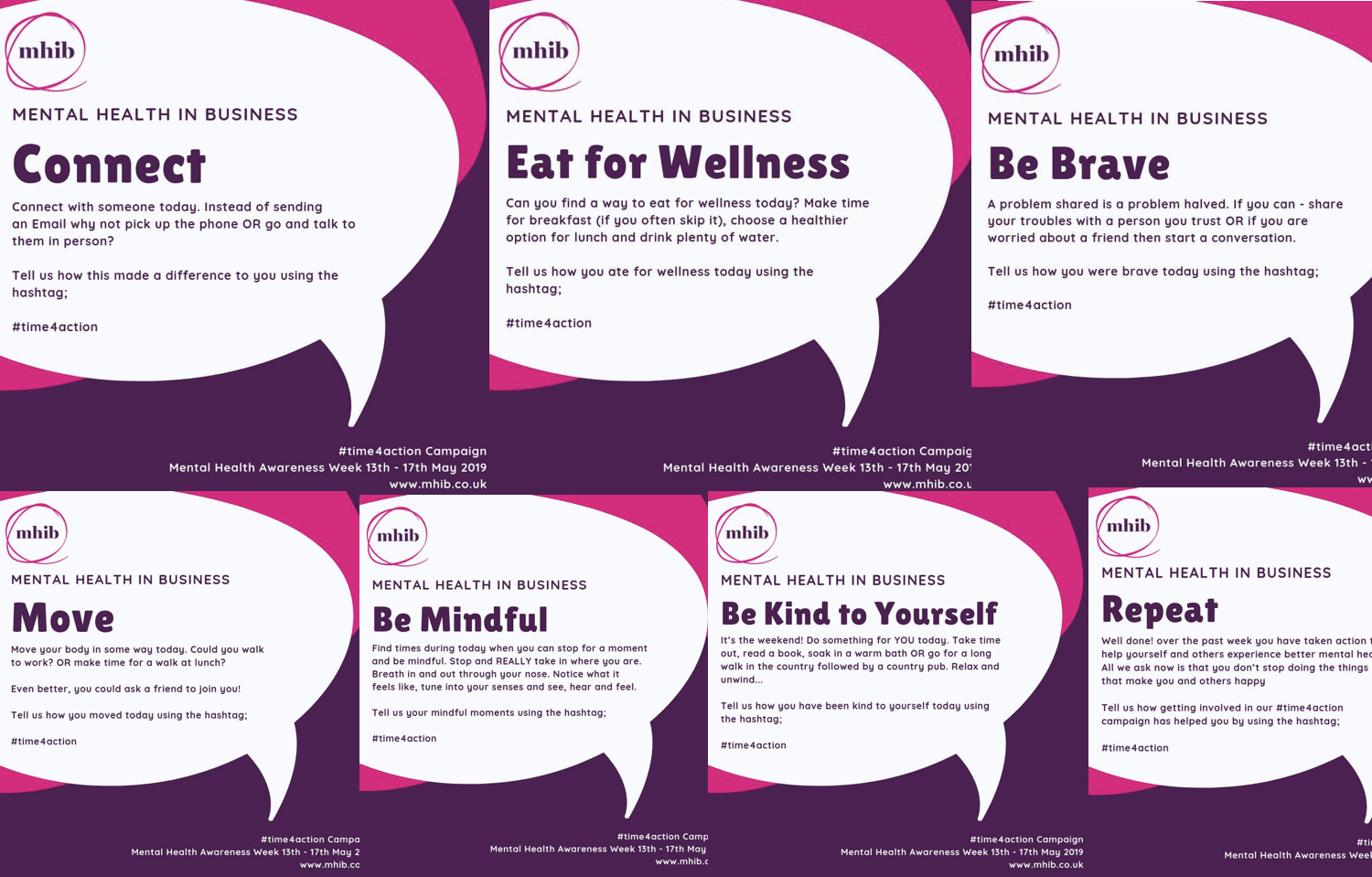 This has been an important week in our business – we had some big things going on behind the scenes but most importantly it has been Mental Health Awareness Week and we have been running our #time4action campaign.

The idea for the campaign came out of a discussion between myself and the other Directors in the business, Nikki and Steve. We were sharing our frustration that, while it is inarguably very positive that there is more dialogue about mental health than ever before – from what we can see that is not translating in to the action that is needed.

There is an epidemic of mental ill health – suicide among middle aged men is increasing – there are more children than ever before being referred to children’s mental health services. Mental illness is indiscriminate – it affects men, women, young and old. Depression will soon be the biggest single burden of illness on the global economy.

There have been fantastic advancements in the way that we are talking about mental health. Prince William champions mental health – Prince Harry, Dwayne the Rock Johnson, Kendall Jenner, Adele and recently David Harewood (and many more) have all opened up about their struggles with mental ill-health. Earlier this week I was lucky enough to be at a panel discussion, chaired by Professor Tanya Byron with Freddie Flintoff, Professor Green and Katie Piper in which they all spoke very candidly about their mental health issues.

So, the conversation has opened up – the stigma is slowly being peeled away – it is becoming easier to talk about this once taboo subject.

But where is the action?

I believe that business owners and leaders must take the mantle and start to take action. Professor Tanya Green agrees – to an audience of top business leaders earlier this week, she said “You must all put your money where your mouths are and invest in the mental wellbeing of the people in your care”.

And she is absolutely right.

So – back to Mental Health Awareness Week. I think we all agree that we have got to start to take action – but where to start? It seems like such a huge shift that we have to make. Well, it starts with small actions that we all commit to taking, day in day out (and then some big stuff is needed, for sure).

This week we focused on those small actions – each day we shared an action that we wanted everyone to focus on and to take – and which we committed to ourselves – and the results have been wonderful! LOTS and LOTS of comments and messages and calls and Facebook posts from people sharing what they were doing each day and how they were taking part in our #time4action campaign…

If you missed it – the images are included below with a summary of what each day was about… Its not too late to…..take action.

Day 1: Connect – find a way to really connect with someone 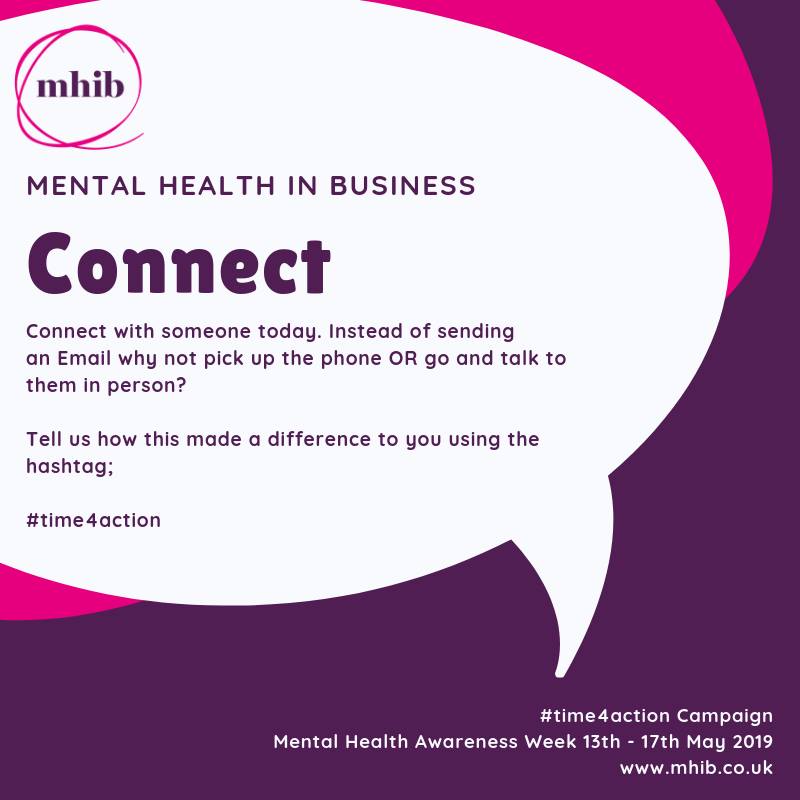 Day 2: Move – build some movement in to your day 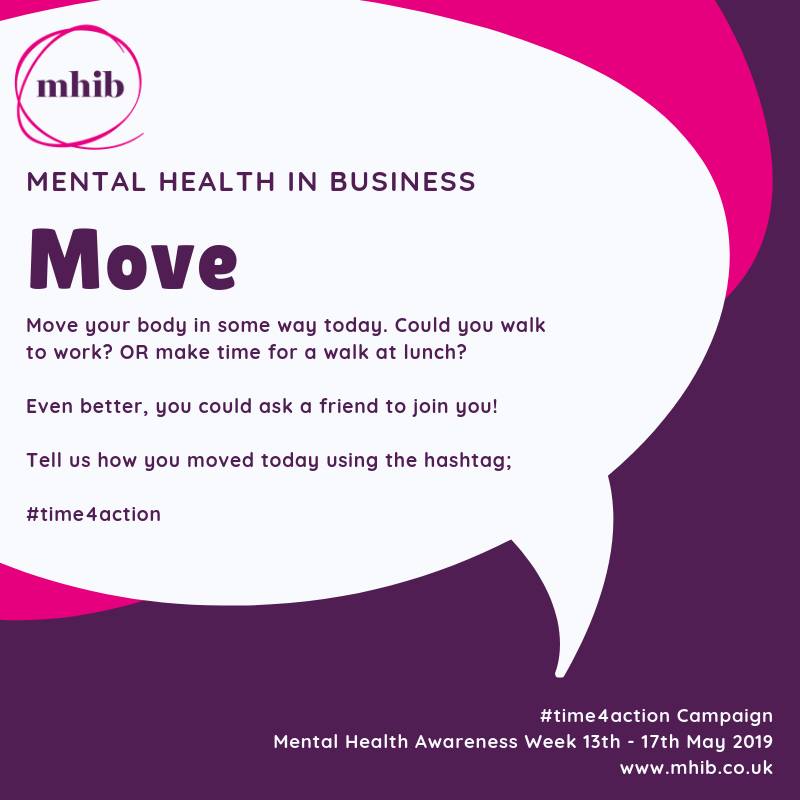 Day 3: Eat for Wellness – focus on eating to nourish your body and mind 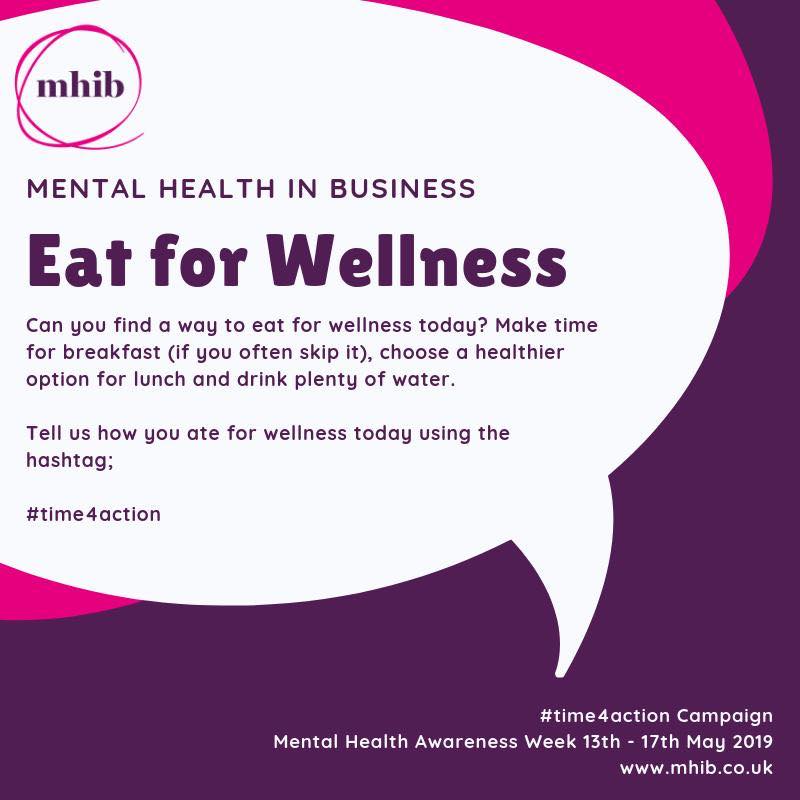 Day 4: Be Brave  - talk to someone, share a problem or ask a friend if they are ok 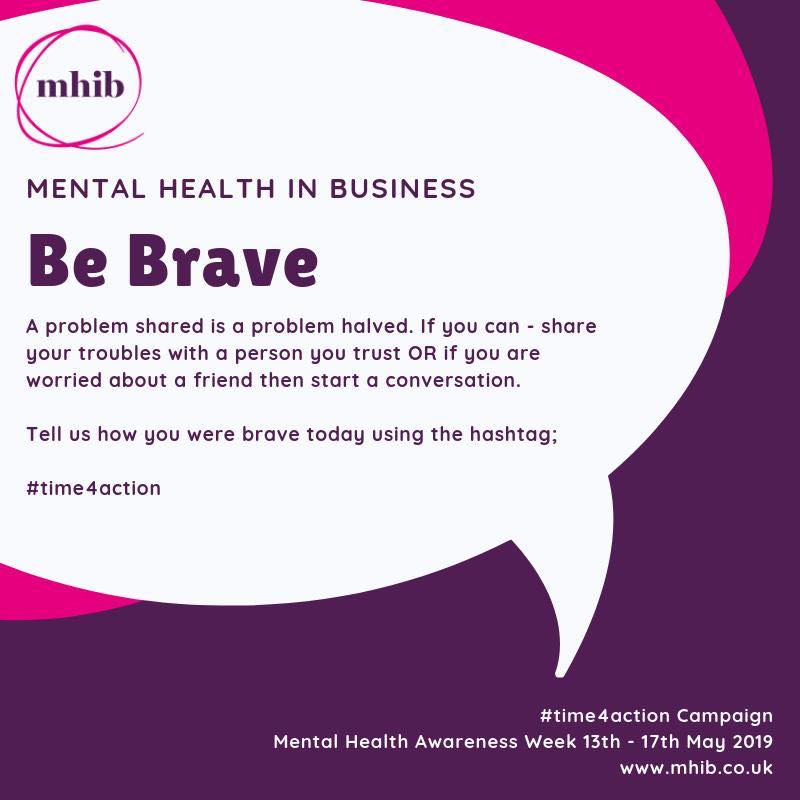 Day 5: Be Mindful – be present, notice and appreciate 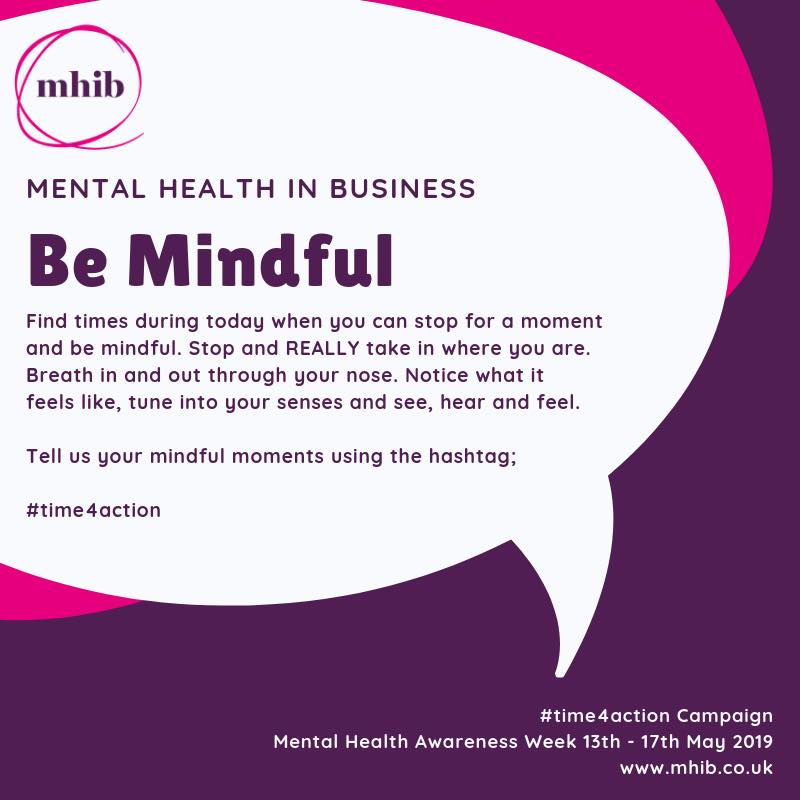 Day 6: Be Kind to Yourself – do something for you 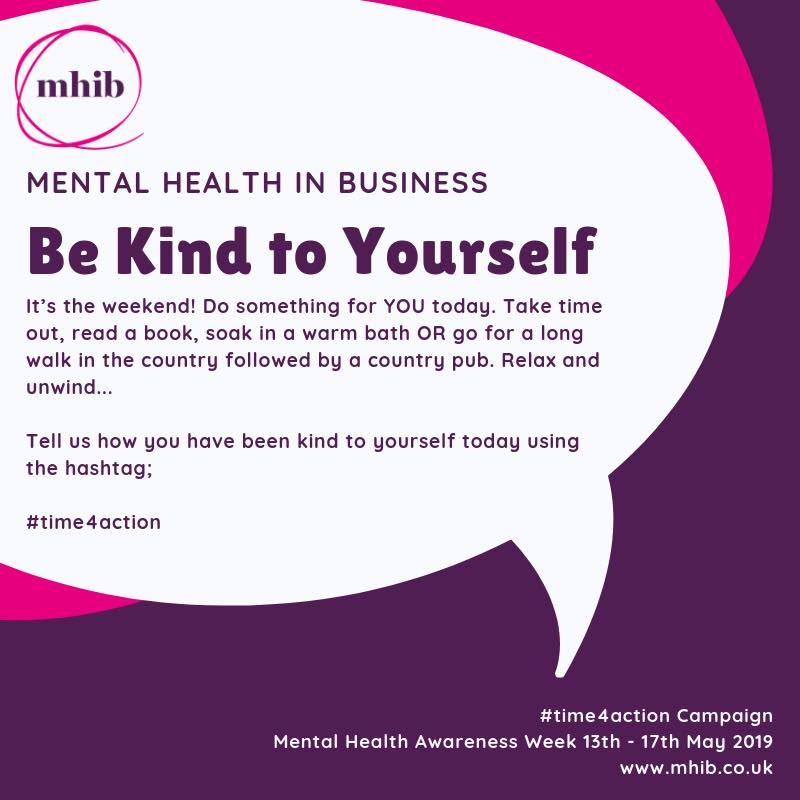 Day 7: Repeat – keep on doing the things that make you, and others, happy. 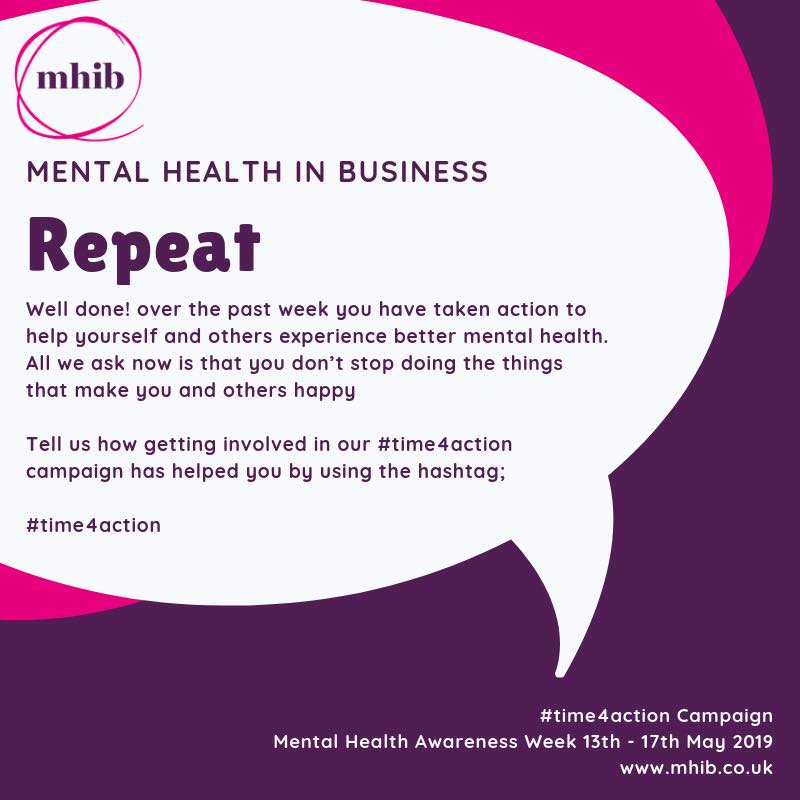 Thank you for reading (if you made it this far) – and supporting our campaign – this is just the beginning – keep watching for news of what is coming next.